April was a “happy-sad” month for Peter and me. We are still living at the Inn at Stonington. We’ve changed the motto, “There’s no place like home,” to “There’s no place like the Inn at Stonington.” We truly love it here and this will be home for us for quite a while, a great blessing for us as Peter continues to heal miraculously well. Friends tease him that “the convalescent home” is so ideal that he’s never looked younger, never looked better.

The first weekend of April we had the First Writer’s Weekend we called the Writer’s Happiness Retreat. We welcomed many friends who came to share this experience with us – Kerri and Matt from Londonderry, New Hampshire, Lisa from San Jose, California, Joe and Vicki from Rutherfordton, North Carolina, Mary from New Lenox, Illinois, Sharon from Ellicott City, Maryland, Doug from San Antonio, Texas, and dear Ginny from Lake Worth, Florida. Ginny has faithfully come to almost all our Happiness Weekends and received an award from us at the conference. New people came from near and far and we were definitely a good group to share ideas and inspiration.

We all enjoyed a cocktail reception Friday evening and walked down to a nearby restaurant to sit together at common tables where we exchanged laughter and stories, enjoying a delicious supper at a favorite restaurant, Water Street Café. This was our first event since Peter’s injury February 27th, and it was a most anticipated weekend here at the inn.

Saturday morning after breakfast everyone was invited over to the cottage for a visit. As Peter and I were leaving our room to go greet our visiting guests – a Nikko blue hydrangea pot in my hand, the telephone rang. Suddenly my world was rocked. My dear, dear friend, Roger Mühl, my favorite artist, died in his sleep in his home in Mougins, France. The shock of his sudden, completely unexpected death was too much to absorb. I cried out in anguish with Rebecca, the director of the David Findlay Gallery who loves Roger completely as I do. Peter and I held tightly as we walked to the cottage. I was crestfallen and crying. Compassionately, everyone felt sad as I told them of the tragic news, and I read (rather awkwardly) from my new book, Happiness For Two my first essay, “Treat Each Encounter as Though It Could Be Your Last.” Then we all feasted upon the beauty, light, color and simplicity of Roger Mühl’s paintings. They are everywhere at the cottage. It was profoundly healing as I described what the paintings mean to us, and told stories about Roger, showing a picture of him alongside His Holiness the Dalai Lama that is on my downstairs study desk.

We all then went to Skipper’s Dock, the restaurant where Brooke had her wedding dinner three years ago. We sipped a favorite Pinot Gris wine to toast Roger before we gathered for the afternoon’s writing conference. I felt such tenderness with everyone who reached out to Peter and me with loving tenderness during the whole weekend.

I began the writer’s retreat with a meditation and invited everyone to write the first three sentences of a love letter to someone. I also suggested they write their obituary for a newspaper and a eulogy a friend would write at their funeral, and for each of us to write a eulogy we’d like read at our own funeral. There was a box of stationery and stamps for people to write letters.

During discussion period, we learned that Karen’s character “Emma” in the novel she’s written is very much like Karen, and she is inspired now to pull out her manuscript from the attic and re-write it in a fresh draft to find some solutions to Emma’s evident problems. Everyone helped her to desire her “character” to succeed, to become at peace with herself, and find lasting happiness. At the banquet that is our Saturday night celebration, Peter asked Kerri if she would give a toast. She sat still and giggled, “I’ve never given a toast before but I can’t turn Peter Brown down.” And Kerri joyfully gave her first toast to Roger Mühl: “As a painter approaches his canvas he is blessed to choose from a rainbow of colors that mix and blend into a masterpiece that only he can create. The beauty of gathering “friends” from all walks of life creates a banquet that becomes a memory to cherish for your life. Let us lift our glasses and our hearts as we toast the magnificent life of a man so dear to Alexandra and Peter. To Roger Mühl!!”

Writing always centers me and makes me grateful I have such loving family and friendships. Roger Mühl was my muse. He taught me through his example of being bigger than life to celebrate all the beauty of nature joyfully. His inspiration will live forever in my heart. I wrote the catalogue copy for his one-man show in May in New York City. After his wife Line died the end of December, Roger was deeply grieving. He was able to go back to his studio to paint intensely for the several months before he died of a broken heart. Line and Roger had been together for 57 years and were truly inseparable. I’m writing my September-October Victoria Magazine column about Roger since the theme of the issue is travel and collections. Peter and I will have a tribute to Roger during the opening days of his art show at the gallery in New York.

Another bigger-than-life friend, June Speight, died a few weeks later, and at her funeral her daughter Junie read an essay I wrote about June in my book Living in Love. Peter met June in Bermuda when he was on a family summer holiday in 1937. I met her when I was twenty-one and became her decorator and closest friend. June was the most generous person on the planet. When Alexandra and Brooke were little, she would buy them party dresses and pretend they were hand-me-downs from Junie, but most of them still had the tags on them!. June was colorful and a true character whose enthusiasm and happy heart lit up the world. She was the match-maker for Peter and me and insisted we go to Paris on our wedding honeymoon. After her beloved husband died nine years ago, we brought June with us on a family vacation to Paris where she stayed at the Ritz Hotel that she loved so dearly. Peter and I are off to Paris for our anniversary after the Roger Mühl events in New York. We will go over to the Ritz and toast June, and as we walk about we’ll feel Roger and June’s exuberant spirit. June bought many of his Roger’s paintings over the years, and several years ago purchased one from a show he was having in Paris when we were there together.

I’m writing my book Things Good Mothers Know that has a tight deadline, but I’m loving this book and have sent a batch of copy to be typed up.

The end of April we went to Clarksburg, West Virginia at the invitation of Sandra and Mike, who spent a year organizing a most marvelous event where I was asked to speak on the topic, “Beauty Inspires Your Love For Living.” We were royally wined and dined. People came from great distances and a group of ladies tailgated before the event started. There were 220 people in attendance. What a joy to see the faces of my readers I would meet joyfully for the first time!

I hope May brings great joy to you. I’ll be working on completing a first draft of my book. Our cottage is being gutted. With all the mess and complete disruption, we’ve decided to treat ourselves to an outdoor shower in our Zen Garden.

Now I’m back in stride! I’m living with the knowledge that impermanence and change is life’s essential reality. The 20th century British writer C. S. Lewis reminds us, “Bereavement is a universal and integral part of our experience of love.”

I send great love to you.

Have you taken photos at one of Alexandra's events that you'd like to share? If so, you can email them to AStoddardInc@aol.com. Please be sure to include the names of those in the photo and where and when it was taken! We will try to include them on the website in the future. Thank you. 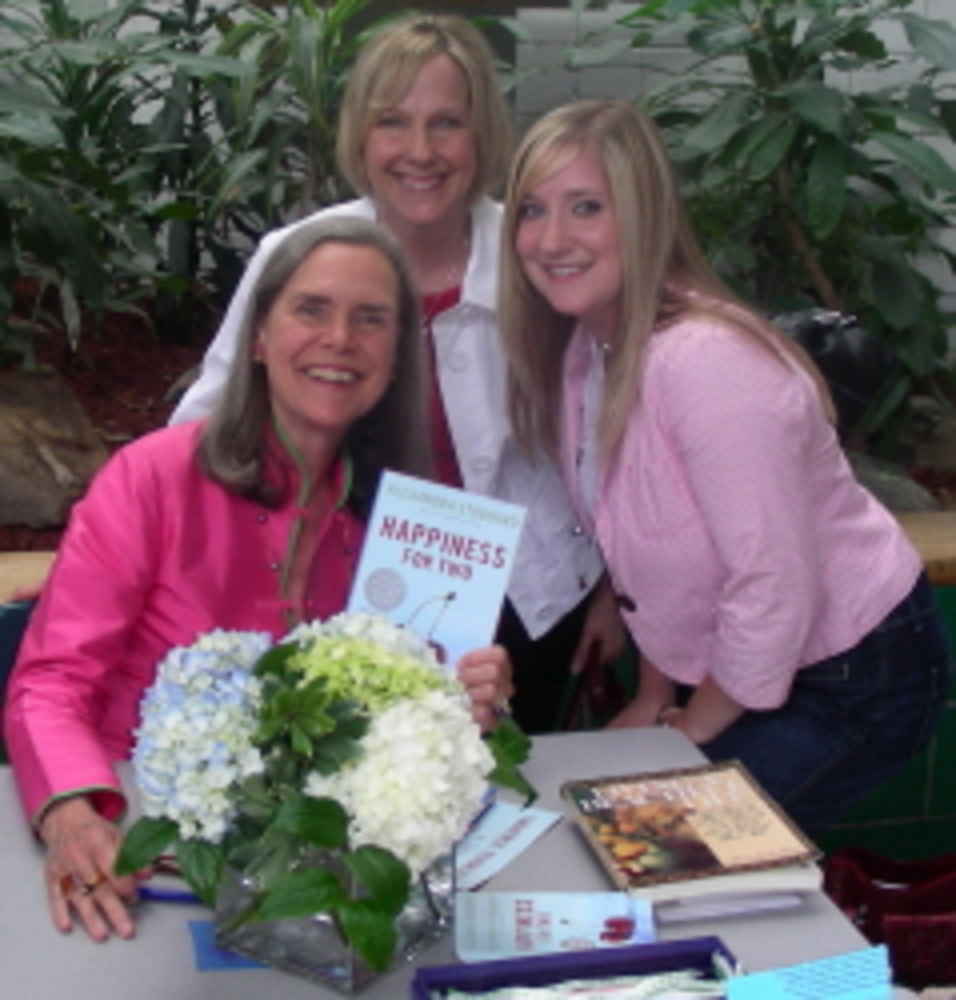 Alexandra, JoAnn and Abby smile for a photo during the Goff Plaza Garden Club event. 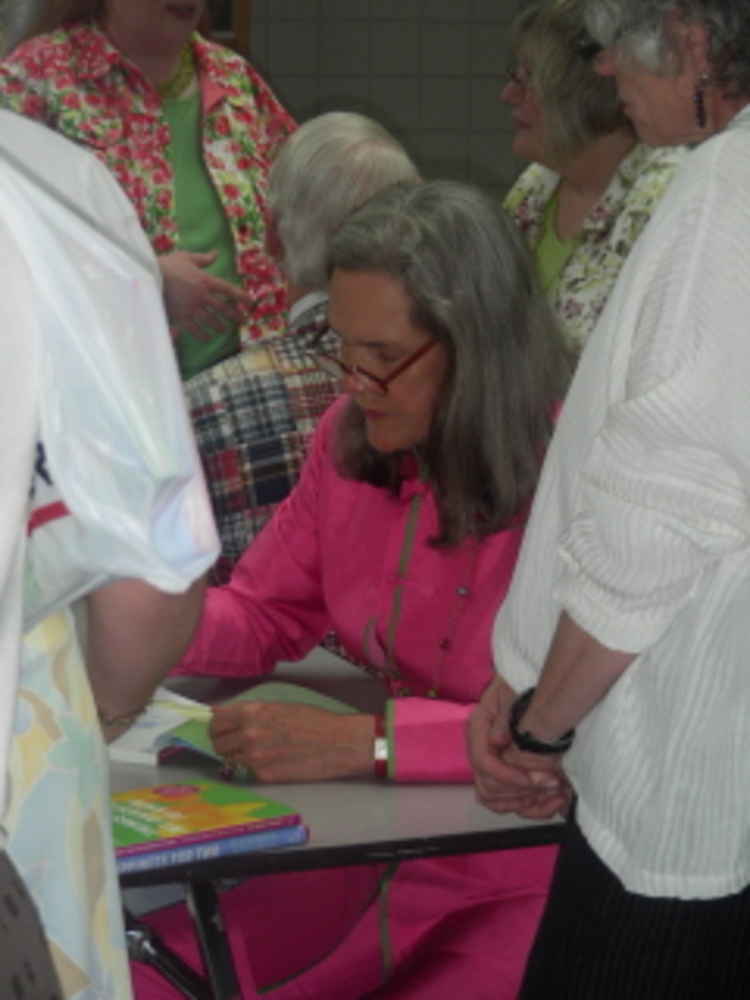 Alexandra signs copies of her book following her talk.

Alexandra with her dear friend and favorite artist Roger Muhl in January 2007. 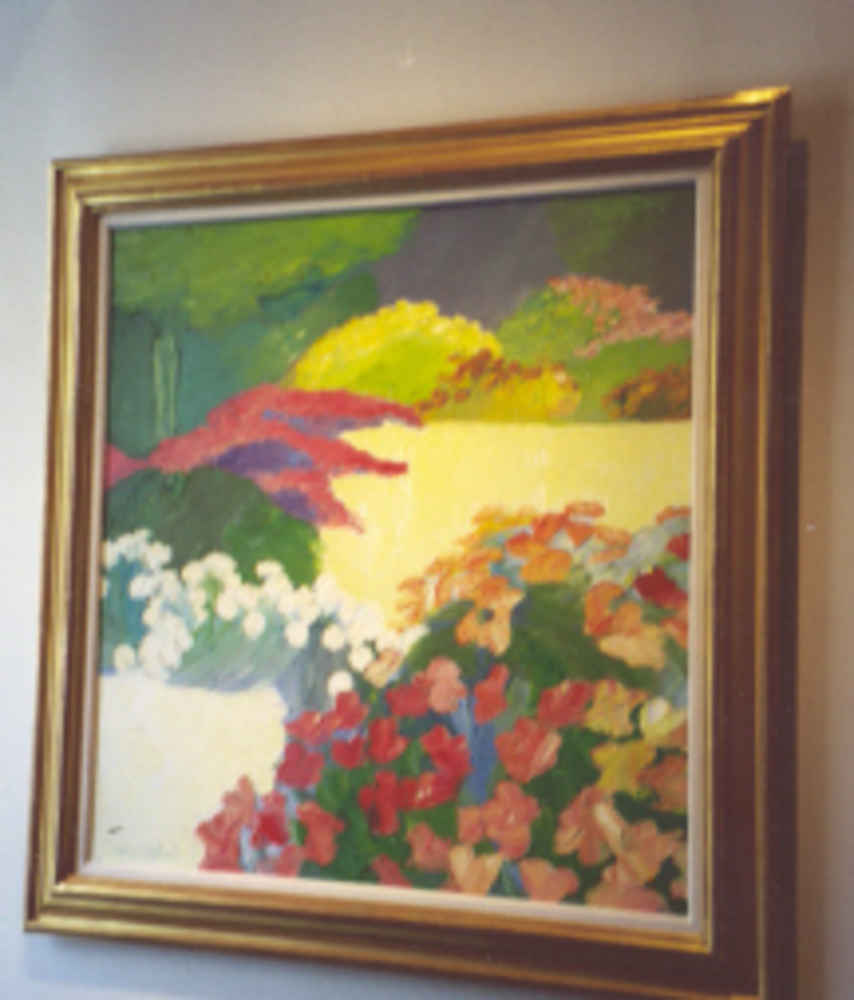 Our Home Away From Home 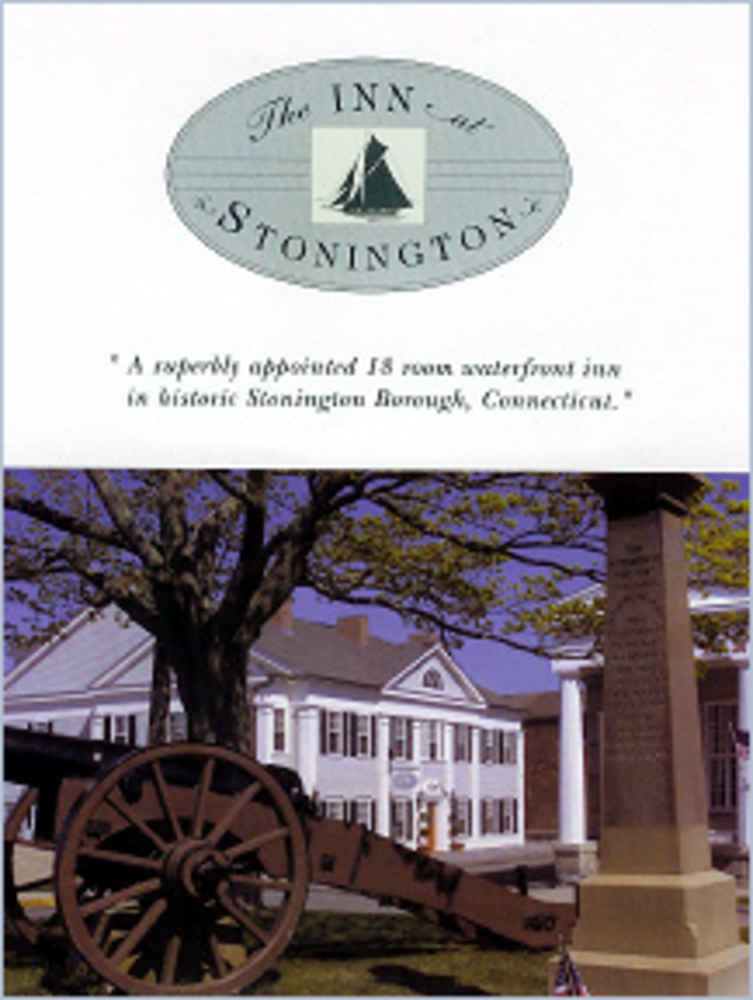 The Art of Questioning by Peter Megargee Brown 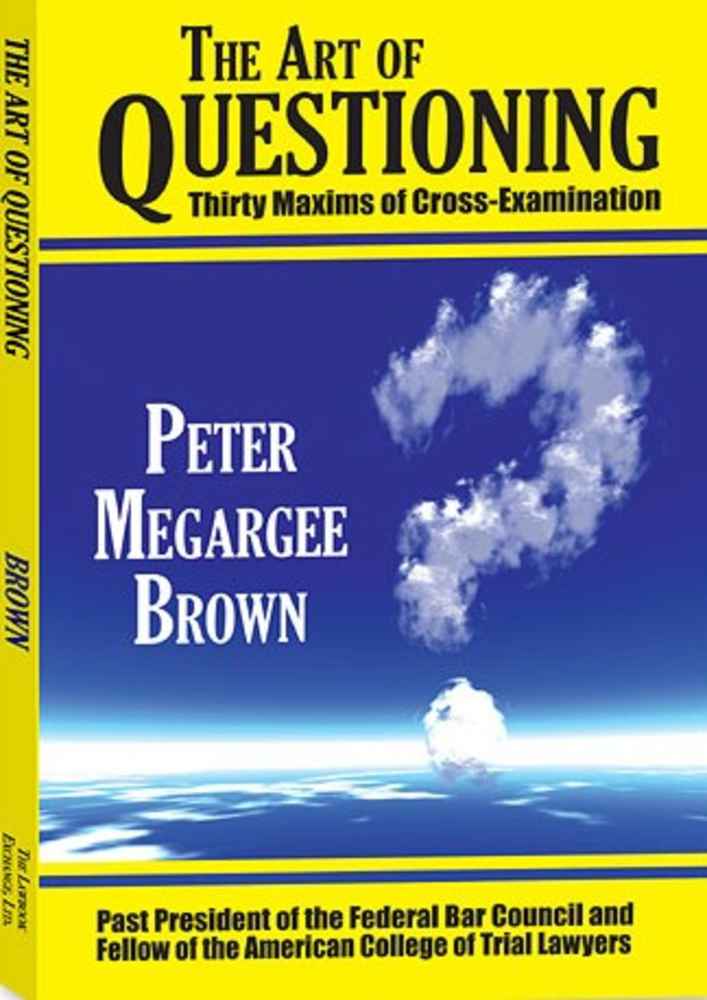 Alexandra and Peter having a good smooch. 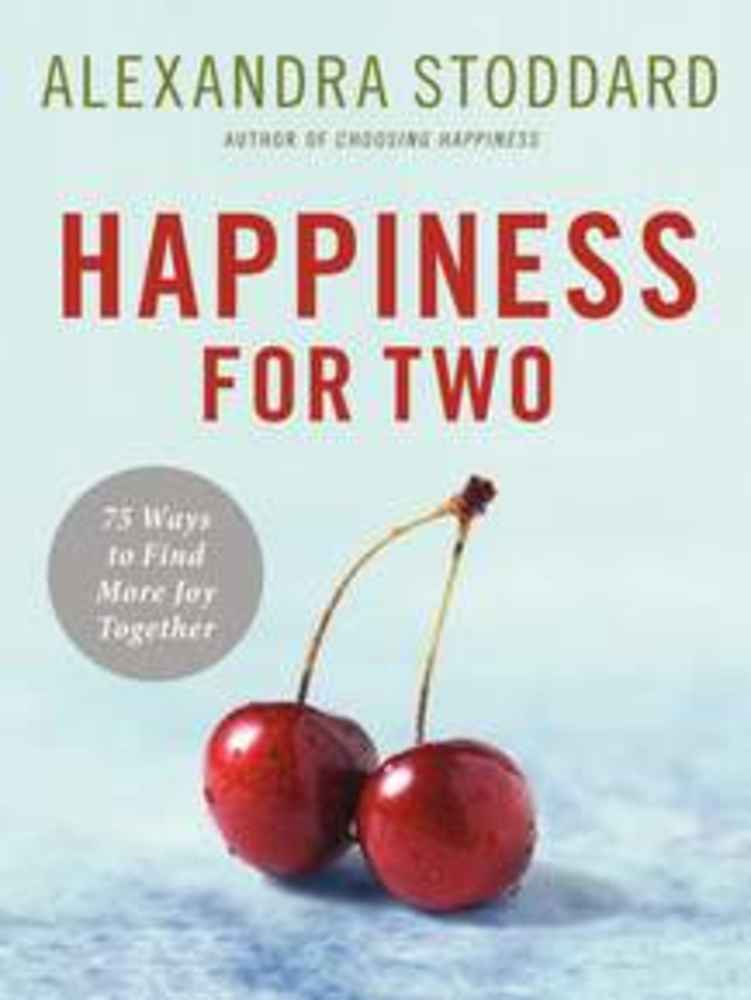 If you would like to order a personalized copy of Alexandra's book, please send your order (including inscription information) to:
Jane Hannon
Bank Square Books
53 West Main Street
Mystic, CT 06355
(860) 536-3795
banksquarebks@msn.com

We have received numerous emails regarding subscribing to Victoria. Please visit www.Victoriamag.com where you can sign up for delivery or to receive email Newsletters!

"Always remember your brilliance."
Alexandra Stoddard
Things I Want My Daughters to Know 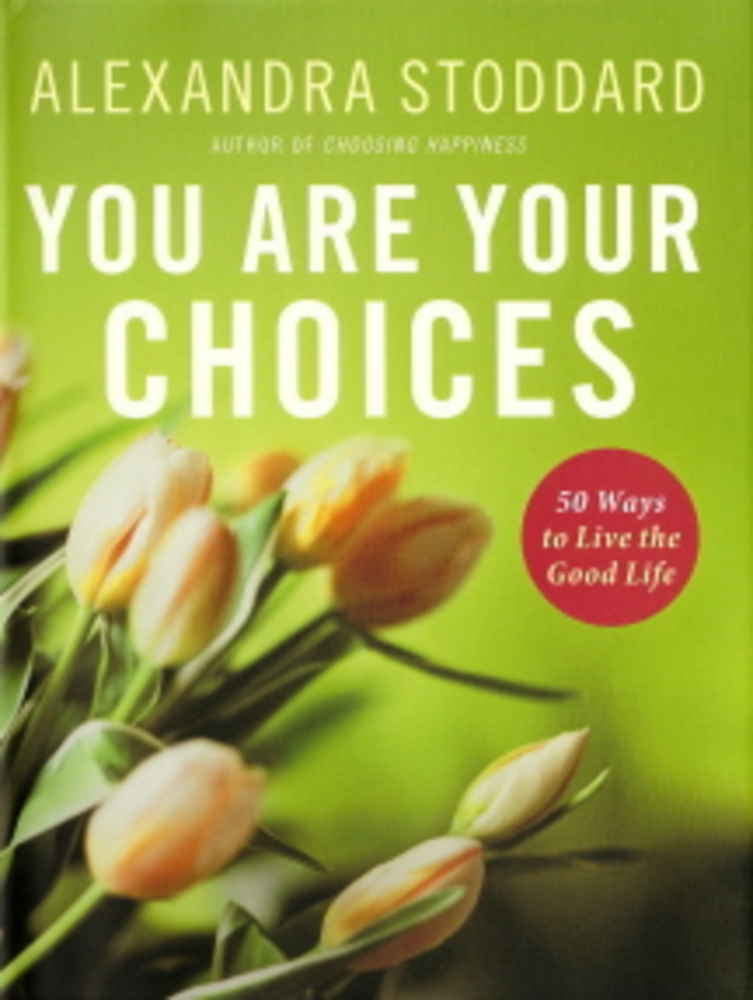 You Are Your Choices

50 Ways to Live the Good Life